Football can change the world 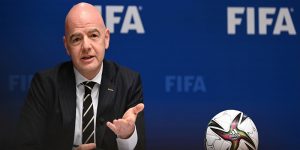 Speaking during a panel session at the World Economic Forum, FIFA President Gianni Infantino reiterated his long-held belief in football’s ability to heal and unite on a global scale, using the upcoming FIFA World Cup Qatar 2022™ as an example of an upcoming opportunity, after the pandemic and global conflicts have isolated and divided people around the world. “Mandela was saying that sport can change the world, that it can inspire, that it unites, and he was right with that,” Mr Infantino told delegates gathered in Davos, Switzerland. “Football, as the most popular sport in the world, has a unique reach. “The last FIFA World Cup was watched by four billion people, the last FIFA Women’s World Cup by 1.2 billion people. This World Cup in Qatar will be watched by five billion people, way above half of the world’s population. All these people who follow and pursue the same passion, they all feel the same way and they all know that football has this uniting force.”

During the session, President Infantino also emphasised that FIFA is committed to putting the power of that reach at the service of society, to contribute to the UN Sustainable Development Goals and to use the sport as a force for good. With a gross output of 200 billion USD, and a gross value added of 150 billion USD – the FIFA President told delegates that it was equivalent to that of a small to medium-sized country, and with that came vast opportunity and responsibility.

“If you translate this economic potential into the social dimension of football, football changes lives,” Mr Infantino continued. “It has changed the lives of many people: those who become players, big players, bigger players, megastars, and boys and girls, who, thanks to football can [experience] values, friendships, team spirit and many other values. So, the social impact is there because of the economic impact. And then the emotion, that’s the irrational part of it. It’s something you cannot explain.”