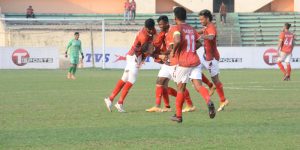 Bashundhara Kings will take to the field against Mohun Bagan with an upper hand because back with three points from the first match and another victory will steer them another step closer to the inter-zone playoff semi-finals as only one team from Group D will make it to the next round.

On the other hand, Indian super league side ATK Mohun Bagan started their campaign in the worst possible way when they suffered a 2-4 defeat to fellow Indian side, Gokulam Kerala FC in what was a poor game compared to their standard.

Led by head coach Juan Ferrando, It will be crucial match for ATK Mohun Began if they are to maintain their hopes of qualifying for the inter-zone playoff semi-finals.

Bashundhara Kings which placed in group D of the AFC Cup with Maziya S&RC of the Maldives, ATK Mohun Bagan and Gokulam Kerela FC of India will play their third and last group D match against Gokulam Kerela FC scheduled to be held on May 24.