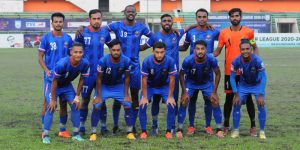 The day’s win saw, Bangladesh Police Football Club raised their tally to eight points from six matches while the freedom fighters Muktijoddha remained at their previous credit of three points playing the same number of matches.

In the day’s match, Moroccan midfielder Adil Kouskous scored the all- important goal for Police in the 44th minute of the match.

After the breather, Muktijoddha, who are struggling to improve their position in the table, tried heart and soul to stage a fight back but could not convert any in the remaining proceeding.

Earlier Bangladesh Police Football Club lost to Saif Sporting Club in their league opening match, played to a 1-1 draw with Abahani Limited, Dhaka in their second match, shared point with Lieutenant Sheikh Jamal Dhanmondi Club playing to a goalless draw int heir third match,went down a 0-3 defeat
to holders Bashundhara Kings in their fourth match and beat Uttar Baridhara Club by 2-0 goals in their fifth match of the league.

Dhanmondi Club in their second match, lost to Bashundhara Kings by 0-1 goal in their third match and went down a 1-2 goal defeat to Uttar Baridhara Club in their fourth match and defeated Swadhinata Krira Sangha by 2-1 goals in their fifth match of the league.