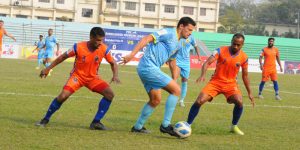 In the day’s match, Brazilian midfielder Denilson Rodrigues Roldão scored for Bangladesh Police Football Club who led the first half by 1-0 goal while Dorielton netted for Abahani Limited.

It was a quite impressive performance by the Bangladesh Police Football Club who kept their tent unhurt giving no any room to Abahani to score and kept he score sheet clean till the 77th minute of the match.

Abahani Limited however produced number of scoring chances, but due to the packed defense by the Police FC defenders, they repeatedly failed to penetrate the Police’s net.

Police’s best moment however came in the 77th minute when Denilson Rodrigues finally broke the deadlock giving his side a deserving lead.

At one stage, it was seemed Police FC were snatch full points from Abahani, but probably there was more drama to remain when Dorielton brought back Abahani in the match scoring a much-needed goal in the 90+3rd minute, few second before the final whistle.

Bangladesh Police Football Club will play their next match against Sheikh Jamal DC on Saturday (Feb 12) at BFLMRS while Abahani Limited will play against Rahmatganj Muslim and Friends Society on Sunday (Feb 13) at Shaheed Ahsan Ullah Master Stadium in Tongi, Gazipur.

Earlier, the popular sky blue Dhanmondi outfit Abahani Limited got off to an winning start in the league when they beat Bangladesh Muktijoddha Sangsad Krira Chakra by a solitary goal held at Shaheed Ahsan Ullah Master Stadium in Tongi, Gazipur while Bangladesh Police Football Club suffered a lone goal defeat to Saif Sporting Club held at BFLMRS in Munshiganj.