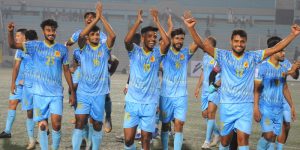 Abahani will now play the final match against the day’s second semifinal winners’ either Bashundhara Kings or Bangladesh Police Football Club. The final will be held on Saturday (Dec 18) at the same venue.

In the day’s match, Costa Rica forward Daniel Colindres and forward Nabib Newaz Jibon netted one goal each in both half to secure victory for Abahani who led the first half by 1-0 goal scored both.

Colindres opened an account scoring the first goal for Abahani Limited in the 25th minute while after resumption Jibon sealed the victory for Abahani scoring the second goal in the 82nd minute of the match.

Saif SC however tried heart and soul to stage a fight back in the remaining proceeding but could not convert any.

The traditional sky blue Dhanmondi outfit dominated the proceeding and notched their deserving victory on the day while the Federation Cup runners- up Saif SC were off-colored.

Earlier, on way to the semifinal, Abahani Limited, Dhaka, crushed ten men Bangladesh Army Football team by 4-0 goals in the first quarterfinal while Saif Sporting Club confirmed their spot of last four when they beat ten men Swadhinata Krira Sangha by 2-0 goals in the second quarterfinal.

The traditional sky blue Dhanmondi outfit Abahani Limited, Dhaka maintained their supremacy in the group phase matches. They beat Swadhinata Krira Sangha by 2-1 goals in t heir first match and emerged group champions by defeating Rahmatganj Muslim and Friends Society by 3-1 goals in their second and last group A match of the competition.