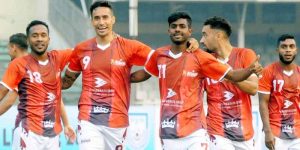 The day’s win will allow Bashundhara Kings to play the second semifinal against Bangladesh Police Football Club, following the first semifinal match between Abahani Limited, Dhaka and Saif Sporting Club. Both the semifinals will be held on Tuesday (December 14) at the same venue.

In the day’s match, Brazilian midfielder Jonathan Farnandes scored a brace while midfielder Matin Mia and substitute Sheikh Alamgir Kabir Rana supported him with one goal each for Kings.

After the barren first half, Matin finally broke the deadlock scoring the first goal for Kings in the 58th minute while Jonathan doubled the lead scoring the second goal in the 73rd minute of the match.

Jonathan further widened the team’s margin scoring his second and third goal for Kings in the 81st minute while Rana completed the winners’ tally scoring the fourth goal in the 90+4th minute of the match.

The premier league champions Kings clearly dominated the entire proceeding and notched their deserving victory while Sheikh Jamal were totally off-colored on the day.

While Sheikh Jamal Dhanmondi Club earlier blanked Bangladesh Air Force Football team by 3-0 goals in their group opening match, played out to a goalless draw with Uttar Baridhara Club in their second group match and finished as group B runners-up after playing to a 1-1 goal draw with Sheikh Russel Krira Chakra in their third group match.