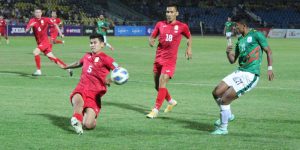 In the day’s match, Eldar Moldozhunusov, Alimardon Shukurov, Tursunali Rustamov and Baktiyar scored one goal each for Kyrgyzstan who led the first half by 2-0 goal. Mahbubur Rahman Sufil scored the lone goal for Bangladesh.

Eldar Moldozhunusov opened an account scoring the first goal for Kyrgyzstan early in the 10th minute while Alimardon Shukurov doubled the lead for the hosts in the 40th minute of the match.

After the breather, Kyrgyzstan came to the field with more organized way and added two more goals to secure their emphatic victory on the day when Tursunali Rustamov further widened the margin scoring the third goal for Kyrgyzstan in the 47th minute of the match.

Sufil reduced the margin scoring a lone goal in the 53rd minute while Baktiyar sealed the victory scoring the fourth goal for Kyrgyzstan in the 89th minute of the match.

The hosts dominated the entire proceeding and notched their deserving victory on the day while Bangladesh were totally off-colored except the day’s lone goal.

Earlier, Bangladesh made a losing start in the tournament as they went down a 0-2 goal defeat to upper ranked Palestine who also lost to the host team by 0-1 margin in the tournament opening match.  Bangladesh will play a preparation match against Kyrgyzstan U-23 team scheduled to be held on Thursday (Sept.9) at the same venue.