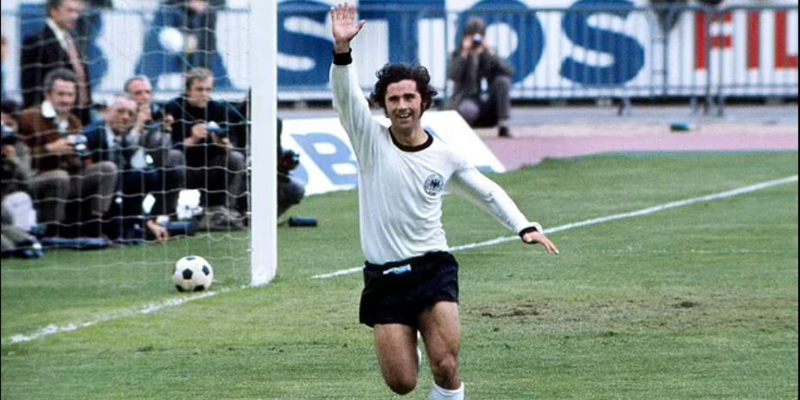 German football legend Gerd Muller has passed away at the age of 75, his former club Bayern Munich announced on Sunday.

The former striker was regarded as one of the greatest ever forwards to play the game and helped his country to the 1974 FIFA World Cup and 1972 Euros title.

Muller was also Bayern Munich’s all-time record goalscorer with 563 goals in 605 Bundesliga appearances and was known for his clinical finishing inside the penalty box.

The former footballer was diagnosed with Alzheimer’s disease in 2015 when he was a coach of Bayern’s second team, while he also suffered from alcoholism when his playing days ended in 1982.

In an emotional Twitter post, Bayern Munich said: ‘Today the world of FC Bayern stands still. The all-time record German champions and its entire fan base mourn Gerd Müller, who died early on Sunday morning at the age of 75.’
Bayern president Herbert Hainer added: ‘Today is a sad, black day for FC Bayern and all of its fans. Gerd Müller was the greatest striker there has ever been – and a fine person, a personality in world football.

‘We are united in deep sorrow with his wife Uschi and his family. Without Gerd Müller, FC Bayern would not be the club we all love today. His name and the memory of him will live on forever.’

Bayern’s chief executive Oliver Kahn said in a statement: ‘The news of Gerd Müller’s death affects us all deeply.

‘As a player and as a person, Gerd Müller stands like no other for FC Bayern and its development into one of the largest clubs in the world. Gerd will be in our hearts forever.’