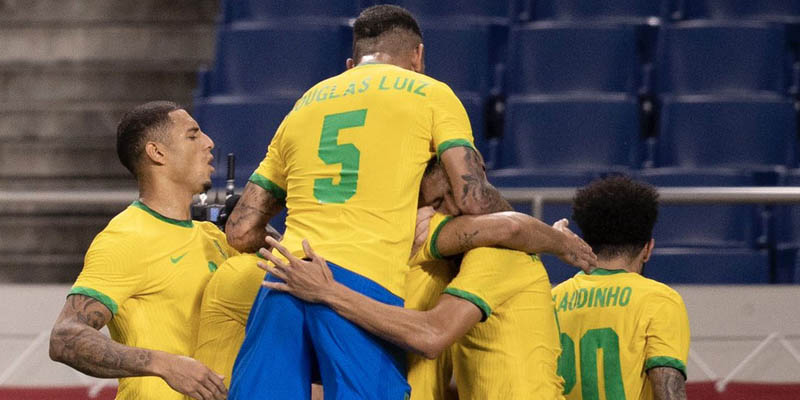 After winning the 2002 World Cup in Japan, Brazil will once again have the chance to go for gold in the Asian country after qualifying for the Olympic final with a penalty shootout victory over Mexico.

It was a match of rather limited quality, with the tournament’s two top-scoring teams unable to break the deadlock across 120 minutes of football.

Brazil were awarded a penalty inside the first half hour when Douglas Luiz appeared to have been brought down by Joaquin Esquivel, although VAR would show that the contact was initiated by the Brazilian and the decision was reversed.

The second half was a much more tepid affair with few chances coming for either team, although an ugly exchange involving Luiz could have seen him sent off for an elbow.

With just seven minutes left to play the biggest chance of the match would arrive, and it would fall at the feet of Brazil’s most potent goalscorer this summer.

Everton’s Richarlison was on hand to apply the finishing touch to a sublime Dani Alves cross from the right, yet the forward would see his effort cannon off the post.

Fatigue plagued extra time as both teams seemed to accept a penalty shootout, and you have to remember that some of these players haven’t necessarily had a break since the chaotic scheduling of football courtesy of COVID-19 began in June 2020.

Mexico will look back on their shootout efforts with disappointment, scoring just once as Brazil eased to a 4-1 victory, with Gabriel Martinelli and Bruno Guimaraes both converting their spot-kicks.

The North American team will have the chance to fight for a bronze medal, whilst the Selecao head to Yokohama with a chance to win their second successive Olympic gold medal.