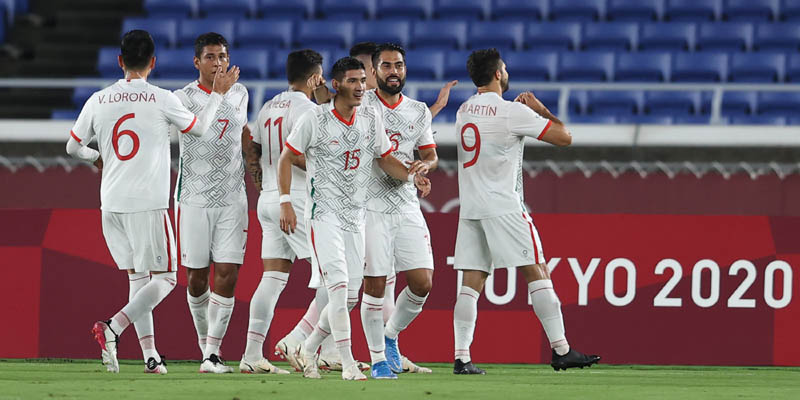 Korea Republic’s journey in the Tokyo Olympics Men’s Football tournament came to an end at the quarter-final stage as they were defeated 6-3 by 2012 gold medallists Mexico at the Yokohama International Stadium on Saturday.

A goal-filled first half saw Henry Martin open the scoring before Lee Dong-gyeong equalised in stunning fashion. Luis Romo put Mexico back in front, before Sebastian Cordova converted from the penalty spot to give El Tri a two-goal cushion at half-time.

Lee Dong-gyeong scored another superb goal after the break, but Martin and Cordova completed their braces to make it a three-goal lead, with substitute Eduardo Aguirre’s strike to make it six ensuring a Won Du-jae late header would be no more than a consolation as Jaime Lozano’s men progressed into a semi-final showdown with defending champions Brazil.
Despite Korea Republic coming into the tie as the tournament’s top scorers it was Mexico who drew first blood inside the opening quarter of an hour.

Alexis Vega’s deep cross from the left was headed back across goal by Romo and Martin bravely nodded home past the outstretched leg of Jeong Tae-wook.
Kim Hak-bum’s charges almost responded instantly but Guillermo Ochoa smothered Hwang Ui-jo’s effort from close range after Lee Dong-jun’s pull back inside the area.

The East Asians next effort on goal on 20 minutes was from further out, far more effective, and much more spectacular. Lee Dong-gyeong stood up Romo and swept a wonderful shot from the D past Ochoa.

The action continued in the same vein with the game’s third another gem. Vega again picked out Romo with a superb ball and the Mexico number 7 cushioned the pass with his right leg and then fired past Song Bum-keun with his left in one movement to restore their lead just before the half hour.

And things got worse for the Koreans just 10 minutes later as Kang Yoon-seong was penalised for a foul on Uriel Antuna inside the area and Cordova confidently sent Song the wrong way from the spot.

Ochoa then had to be at this best to deny Lee Dong-jun, before he got fingertips on Lee Dong-gyeong’s free-kick to push it onto the crossbar and over in first half stoppage time.
Kim Hak-bum rang the changes in midfield at half time bringing on Won Du-jae, Kwon Chang-hoon and Um Won-sang, but it was one of the starting 11, Lee Dong-gyeong, who had an immediate impact just two minutes after the restart unleashing a fearsome half-volley across Ochoa to reduce the deficit.

But Mexico responded once more. Martin connecting with Cordova’s inviting free-kick to head home his second and make the scoreline 4-2 to Lozano’s side just three minutes later.
And that lead became three as Cordova rivalled Lee Dong-gyeong for the goal of the game as he thundered a rocket from outside the area that crashed in off the underside of the crossbar to make it 5-2 to Mexico on 63 minutes.

Star midfielder Lee Kang-in was brought in to try and turn around the tie, but the Valencia CF man was unable to help claw back the deficit and it was instead Mexico who added a sixth with Diego Lainez setting up fellow substitute Eduardo Aguirre with seven minutes remaining to cap an evening to forget for Korea Republic, despite Won Du-jae’s stoppage time goal giving the scoreline a bit more respectability.