‘We are not afraid of America!’ 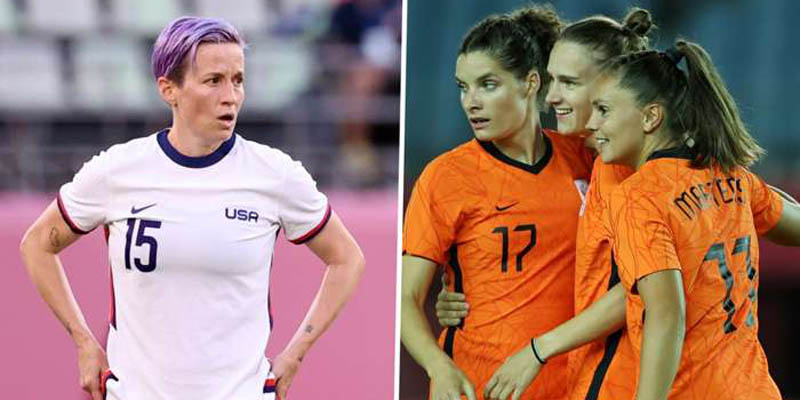 After losing to the United States in the 2019 Women’s World Cup final, the Oranje would love revenge in Friday’s Olympic quarter-final
“We do see opportunities against America, because in the group stage it turned out that they are vulnerable.

“Now is the time, now it has to happen.”

Those were the words of Netherlands head coach Sarina Wiegman on Tuesday, after her side had set up a rematch of the 2019 Women’s World Cup final, as they prepare to face the U.S. women’s national team in the quarterfinals of the Olympic Games on Friday.
There were some who pondered whether the Dutch would hold back in their final group game in a bid to avoid the world champions, who beat them 2-0 in France two years ago.

But while many questioned why the U.S. seemingly played for a draw in their final game, a goalless draw with Australia, there were no signs of the Netherlands doing so.

China were dispatched emphatically in an 8-2 win, with Vivianne Miedema breaking the record for most goals scored in a single Olympic tournament in the process.

She has eight goals in three games, surpassing the target of six which Christine Sinclair scored at London 2012.

With her team-mates adding another 13 in Japan, it is no wonder that they are confident going into Friday’s last eight tie.
“We have again scored eight, which I think is also a gesture to show that we are not afraid of America,” midfielder Danielle van de Donk said. “Let them keep [their] form, because in my eyes they are not very strong now.

“Somehow I feel like, save the best for last. But maybe they are not the best at all, this tournament.”

The goal-scoring of this Dutch team is indeed their strength, which matches dangerously with the defensive fragility that the U.S. has shown.

But the Netherlands have by no means had a flawless route to the knockout stages, even if they come into the last eight in a better place than their opponents.

They have conceded eight goals in three games, with some very sloppy and avoidable ones among them.

Goalkeeper Sari van Veenendaal, named the best in her position at the World Cup two years ago, has not been in the same form so far, with the defence showing signs of being prone to error.

In fact, only the eliminated duo of China and Zambia, who they beat 8-2 and 10-3, respectively, in the group stage, have made more errors leading to goals in the tournament so far.