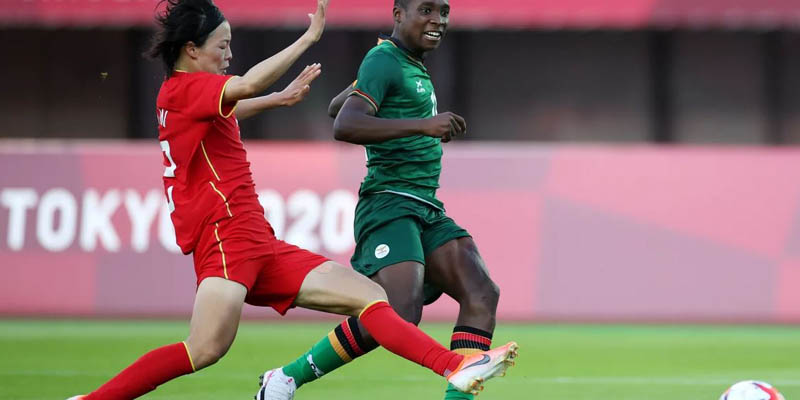 Zambia captain Barbra Banda has, after two hat-tricks in two games, tied the record for most goals scored by a woman (6) in Olympic football since the inaugural event at Atlanta 1996.

Team captain Barbra Banda arrived in Japan with a reputation as Zambia’s best-ever women’s footballer. And she’s doing that reputation no harm at her – and her country’s – first-ever Olympic Football Tournament (men’s or women’s).

Her hat-trick in a thrilling 4-4 draw against People’s Republic of China in Zambia’s second game here in Tokyo came just two days after her first hat-trick – in a goal-littered 10-3 loss to 2019 FIFA Women’s World Cup runners-up the Netherlands.

With six goals so far, Banda, who plays her club football for Chinese side Shanghai Shengli, has become the first woman in Olympic football history to score two hat-tricks in one edition of the Games. She’s also now tied with the all-time top goalscorer in Olympic football history (single edition) Christine Sinclair of Canada (who scored six at the London 2012 Games).
Banda’s goal avalanche sees her rush past the likes of immortals such as former American stars Mia Hamm, Michelle Akers and Abby Wambach – as well as world stars like Brazil’s Marta, Birgit Prinz of Germany and Sun Wen (People’s Republic of China) — none of whom ever reached the marker of six goals at one Olympic Games or managed a pair of hat-tricks.

The striker, who’s still just 21 years-old, moved to the top of the scoring charts for Tokyo 2020’s women’s football tournament and is looking a good bet for Tokyo 2020’s golden boot (awarded to the Games’ top-scorer at every edition of the competition).

Banda is being chased by Dutch sensation Vivianne Miedema, who has four goals so far (with all of them coming in the opening day mauling of Zambia) and Chinese sensation Wang Shuang (who also has four).

With one point from the first two matches, Zambia are still a long way from reaching the knockout rounds. They’ll need a result in their final Group F match, against South American giants Brazil, to give their captain more more runway to further rewrite the record books.