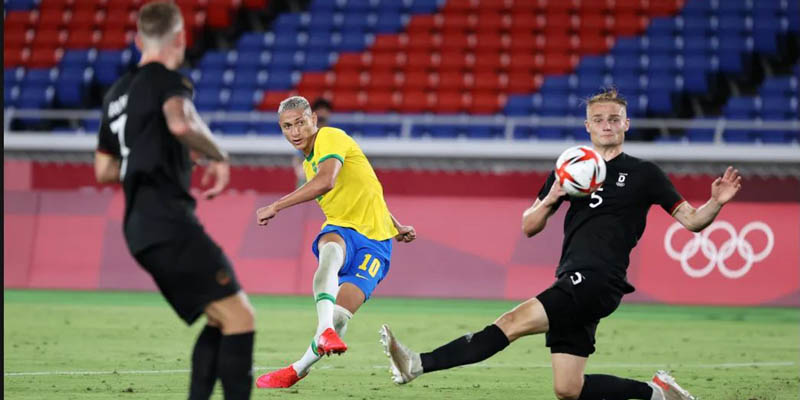 Brazil’s opening game of the Tokyo 2020 (in 2021) men’s Olympic Football Tournament was a replay of the Rio 2016 final. Three goals from Everton-based Richarlison seemed to have ended the affair as a contest inside 30 minutes — but a late fightback from a German side, reduced to ten men after captain Maxi Arnold was sent off, created a little bit of drama in the final minutes of the match before ending 4-2 for the gold holders thanks a late insurance goal from Paulinho.

Richarlison dispelled any notions that he might be suffering from fatigue after arriving in Tokyo from the recently concluded, and gruelling, Copa America when he scored Brazil’s opening goal of these Olympic Games after only seven minutes.

Playing in the central, no.9 position for this Brazilian team, Richarlison raced in behind the German defense to latch onto Antony’s killer through-ball from midfield. The Everton striker forced German goalkeeper Florian Muller, of Stuttgart, into a fine save with his first effort, but he made no mistake with his right-footed follow-up to open the scoring (1-0) for the Rio 2016 gold medallists.

Brazil – among the firm favourites for another gold here in Tokyo – bossed the rest of the first half with outstanding counter-attacking play. Richarlison wasted a chance to get his second of the day on the quarter-hour mark when he pounced on a poor Amos Pieper back-pass, but he couldn’t find a way to beat Muller despite being clean in on goal.

He got it right in the 23rd minute, getting on the end of a Guilherme Arana cross from the left and heading home at the near post, before going on to make it 3-0 – and seemingly killing off the game – just before the half-hour mark when he cut inside from the left and curled a right-footed shot home inside the far post from the edge of the penalty area.

The South Americans had a chance to make it 4-0 in the dying seconds of the first half, but the busy Muller dove well to his left to save Matheus Cunha’s penalty kick, which was given for a handball inside the German penalty area.

Such was their lack of involvement an any attacking up to that point, that Germany’s goal in the 56th minute was a shock to all involved – even the scorer. Nadiem Amiri’s shot from the edge of the Brazilian box took a wicked deflection before bouncing awkwardly past goalkeeper Santos.

Shortly after that glimpse of life, the Germans were reduced to ten men when captain Maxi Arnold was sent off in the 62nd minute for a tackle – one of many – on Richarlison, which led to his second yellow card of the game. But the Germans, historically so competitive, had a few more frights left for the Brazilians, who seemed to lose their composure after several substitutes entered the game.

Ragnar Ache made it 3-2 seven minutes from time with a header inside the six-yard box to set up a nervy finish to the contest that seemed done and dusted in the early stages. But when substitute Paulinho hit the top corner of the net in second-half stoppage time, the fourth Brazilian goal signalled the end of Germany’s fight and settled the result at 4-2.

Up next – on 25 July – Brazil will look to cement their Group D dominance against African competitors Côte d’Ivoire. The Germans, for their part, will be desperate to get back on track when they take on Saudi Arabia on the same day (both games in Yokohama.