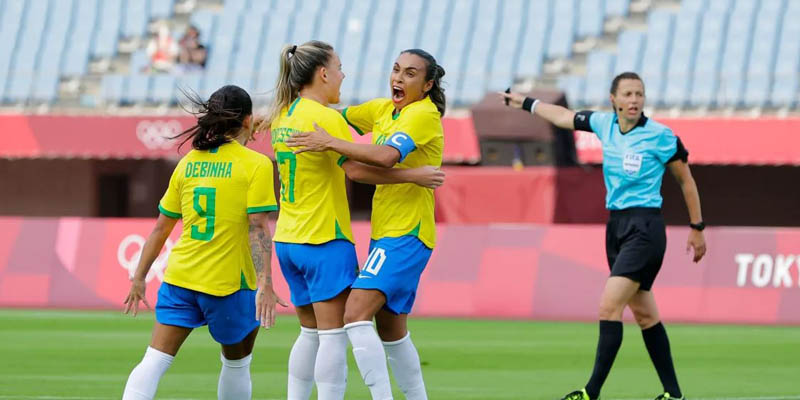 There is euphoria in Brazil after Marta’s record-breaking goals at Tokyo 2020 on Wednesday (21 July).

The six-time FIFA World Player of the Year became the first footballer to score in five straight Olympic Games, netting twice in her nation’s 5-0 opening win over China.

There was an outpouring of love on social media for the 35-year-old led by her compatriot Pele, one of the all-time greats in the men’s game.

In a touching social media post he said, “I hope you’re dreaming about what you did a few hours ago. Speaking of which, how many dreams do you think you inspired today?

“Congratulations on your trajectory. Congratulations, you are much more than a football player. You help build a better world with your talent, in which women gain more space.” – Pele’s message to Marta on Instagram

Another heart-warming moment on the pitch saw Marta dedicate her goals to her fiancée and Orlando Pride teammate Toni Pressley, by making a ‘P’ sign in both of her goal celebrations…

But the Brazil captain wasn’t her team’s only record breaker on the night. Marta’s 43-year-old teammate Formiga became the first women’s player to take part in seven Olympic Games.

The Sao Paolo midfielder, who has 201 caps for her national team played 72 minutes against China.

Formiga made her Brazil debut as a 17-year-old at the 1995 World Cup and has played in every Olympic Games since women’s football made its debut at the 1996 Atlanta Games.

She briefly retired from international football after Rio 2016, but was persuaded to return by the former national team coach Vadao for the Copa America Femenina in 2018.