Colombia Edge Past Uruguay On Penalties 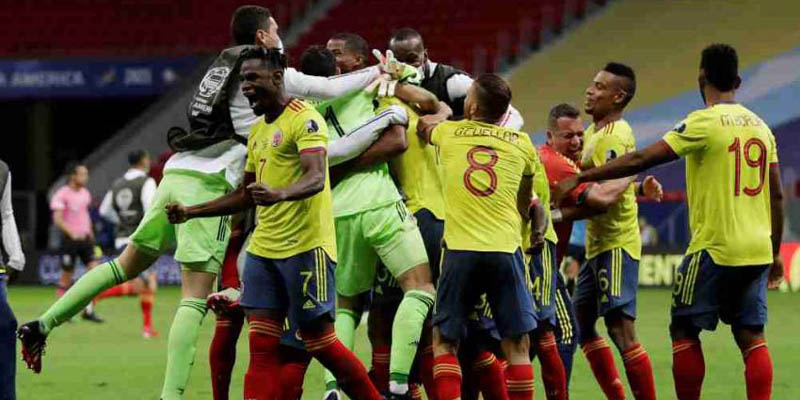 Colombia has reached the semifinal with only one win in five matches; a 1-0 victory against Ecuador in the first round of the group stage.

Two penalty shootout saves by goalkeeper David Ospina put Colombia in the semifinals of Copa America after a 0-0 draw with Uruguay in regular time and kept alive its hopes of a first Copa title since 2001.

The 4-2 shootout win on Saturday at the Mané Garrincha Stadium in Brasilia also broke Colombia’s bad luck in recent penalty shootouts and placed 32-year-old Ospina as the team’s player with most international caps, with 112, overtaking retired captain Carlos Valderrama.

Ospina made saves from Uruguay’s Jose Maria Gimenez and Matias Viña which set up a semifinal matchup against Argentina, which beat Ecuador 3-0 in Saturday’s late match.

Saturday’s victory ended a long trauma for in penalty shootouts for Colombia after painful exits in the 2015 and 2019 Copa America editions against Argentina and Chile, respectively. Colombia was also knocked out on penalties in the round-of-sixteen clash against England in the 2018 World Cup.

“We want to give joy to our country, may it have peace,” Ospina said after the match.

Uruguay’s Cavani said his team had improved despite the elimination.

“We have a good feeling here, but it was for us to go out,” he said.

“That’s how penalties work, it can go well, it can go badly. Uruguay had several moments of good football in which we dominated. But in the shootout things can happen like they did.”

Colombia put more pressure on Uruguay from the start despite the absences of suspended winger Juan Guillermo Cuadrado and injured midfielder Matheus Uribe.

Uruguay’s Muslera made the save of the match in the 71st minute in a header by Zapata. Veteran strikers Suárez and Cavani did not get any clear opportunities as Uruguay’s slow build up play through midfield appeared to suit Colombia’s defense.

Colombia has reached the semifinal with only one win in five matches; a 1-0 victory against Ecuador in the first round of the group stage. The draw with Uruguay was the team’s second in the tournament. It has also lost two games.

Colombia was one of the original hosts of Copa America with Argentina, but left the organization amid street protests against President Ivan Duque.

Defending champions Brazil and Peru will play for the other place at the July 10 final at the Maracana Stadium in Rio de Janeiro.