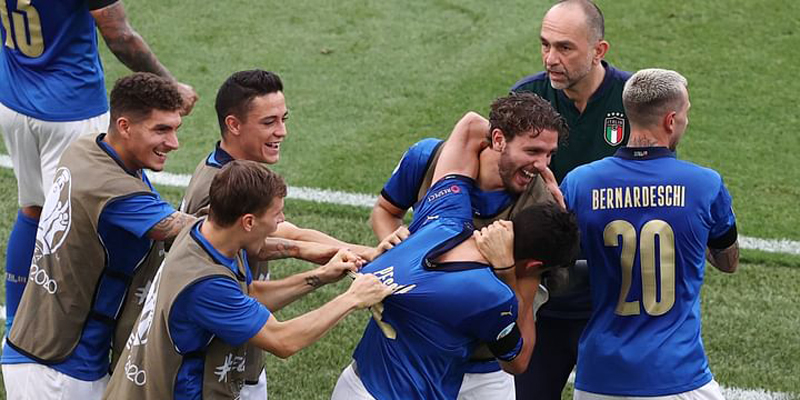 Matteo Pessina scored the only goal as Italy beat Wales in Rome, but both teams could celebrate safe passage through to the last 16.

Matteo Pessina’s first-half goal was enough to ensure Italy beat Wales 1-0 to finish Group A with a perfect record, but their opponents in Rome could nonetheless also celebrate their progress to the round of 16.

The eight changes made by Roberto Mancini looked to have done little to halt the Azzurri’s momentum, with Andrea Belotti and Fedrico Chiesa both threatening to break the deadlock in the opening half-hour. Chris Gunter, without a goal in his 102 caps, went closest for Wales in the first half when he headed on to the roof of the net.

Pessina did find a way through before the break, though, helping on Marco Verratti’s free-kick with the cutest of side-footed glances which took the ball beyond Danny Ward’s dive.

When Federico Bernardeschi struck a post and Ethan Ampadu was shown a straight red card in the opening ten minutes of the second half, Wales’s task looked to have morphed into one of damage limitation. They stood firm, however, and might even earned a point had captain Gareth Bale managed to control his back-post volley.

It mattered not, as Robert Page’s side nevertheless go through as group runners-up, finishing ahead of Switzerland on goal difference.