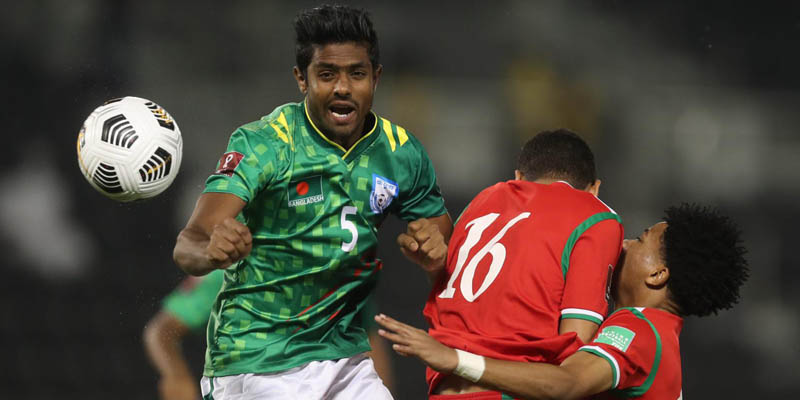 Oman defeated Bangladesh 3-0 in Group E of the Asian Qualifiers for the FIFA World Cup Qatar 2022 and AFC Asian Cup China 2023 on Tuesday.

Oman, who had already secured their berth in the final round of the Asian Qualifiers for the FIFA World Cup Qatar 2022 as one of the best five runners-up, finished with 18 points while Bangladesh ended their campaign without a win.

Oman imposed their presence early in the game and could have gone ahead in the third minute but Khalid Al Hajri’s cross to Mohammed Al Ghafri inside the danger area was intercepted by Bangladesh goalkeeper Anisur Rahman Zico.

However, Oman – who edged Afghanistan 2-1 on Friday – were not to be denied when they opened the scoring in the 23rd minute after a lapse in concentration by the Bangladesh defence.

Omar Al Fazari initiated the move when he sent a through ball to Al Hajri and the forward did well to find the advancing Al Ghafri, who finished off nicely from close range.

Bangladesh wasted an opportunity to level the score in the 29th minute after Yeasin Arafat angled his header straight into the arms of Faiz Al Rushaidi.

Zico, meanwhile was forced to pull off an acrobatic save when he palmed away Mohsin Al Khaldi’s free-kick in the 37th minute and Afghanistan survived another scare at the stroke of half-time when Oman’s Ahmed Al Kaabi’s effort was denied by the post.

Bangladesh conceded their second in the 61st minute when Al Fazari did well with his run inside the box and his cut-back found its way to Al Hajri, who scored with a clinical finish.

Al Hajri added his second goal of the evening in the 81st minute when he combined nicely with substitutes Abdulaziz Al Muqbali and Zahir Al Aghbari, finishing off a fine team move to put Oman 3-0 up.