All BPL matches at BNS until restrictions are lifted 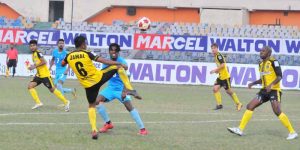 The Bangladesh Football Federation has decided to start the second round of Bangladesh Premier League (BPL) only at one venue Bangabandhu National Stadium (BNS) due to the on going lockdown and restrictions.

The BFF senior vice president and professional football league committee’s chairman Abdus Salam Murshedy, MP, today said as the lockdown has been extended till May 5, so the BFF has made some changes of arranging the second round of the league. All matches of the league will be played at the BNS in Dhaka until the ongoing lockdown and restrictions are lifted.

Murshedy said as the league will be held only at BNS, so minimum two matches will be held on a day at BNS while in some cases we can arrange three matches on a day. The BFF is supposed to provide the fixture of the second round of BPL to the clubs today.

Apart from BNS, the first round of the league was held at AhsanUllah Master Stadium in Tongi, Shaheed Dhirendranath Datta Stadium in Cumilla and Munshiganj District Stadium.