Women’s Football League set to resume from May 5 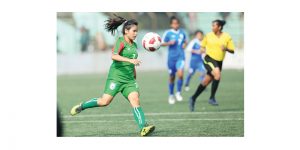 The women’s Football League will resume from May 5 at Birshreshtha Shaheed Sepoy Mohammad Mostafa Kamala Stadium in the city’s Kamalapur.

The League was earlier postponed indefinitely on April 5 last as the government decided to enforce a seven-day lockdown due to the surge of COVID-19.

The second round of the league was going on before it was postponed.

The second round of the Bangladesh Premier League (BPL), which was postponed due to lockdown, is going to roll in the field from April 30. As the BPL is going to resume from April 30, many showed their interest with the women’s league as when the league will start.

As all of the players were Tested COVID-19 negative, so the Bangladesh Football Federation (BFF) women’s wing decided to resume the league before the Eid Ul-Fitr.

BFF women’s wing committee’s chairman Mahfuza Akter Kiron today informed BSS that they have decided to resume the league from May 5.

Defending champions Bashundhara Kings and Kanchizhuli Sporting Club have finished two rounds of the league while the rest played one match at a time.

The defending champions Bashundhara Kings dominate the league table by winning their two matches in the eight-team league. They have scored twenty four goals in two matches. There were 33 goals scored in five matches, for an average of 6.6 goals per match.