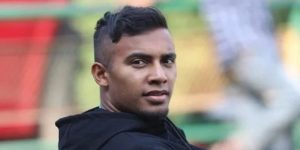 Today is Jamal Bhuyan’S 31st birthday. The Bangladeshi professional footballer Jamal Bhuyan was born in the Danish town of Glostrup on April 10, 1990.

By showing his impressive performance with the ball in the field the 31-year-old midfielder made a good place in Bangladesh’s football.

The Bangladesh Football Federation (BFF) didn’t forget to wish this midfielder on his birthday.

BFF sending a message in the facebook page reading Danish born Bangladesh Professional footballer Jamal Bhuyan has shown the hope to Bangladesh Football. BFF wishes him the best on his 31st birthday today.

On August 31, 2013, Jamal made his debut for Bangladesh national football team against Nepal in 2013 SAFF Championship, becoming the first non-resident player to represent the national side.

He became the most valuable player in the Bangabandhu Cup where eight countries took part.

He also created history by making Bangladesh qualify for the first time in the Asian Games’ knockout stage.