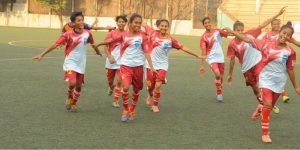 In the day’s match, Thuinu scored ten goals and Lida netted three goals while Munki, Rupa Akter, Sirat Sabrin and Shirin Akter supported them with a lone goal each for Ansar.

In the proceeding, Songkranti Bala and Shahina Akter struck twice each while Sumiya Akter, Srimori Karnofuli, and Nipa Rani supported them with a lone goal apiece for Rajshahi.

With the day’s victory, Rajshahi emerged group A champions while Ansar finished group runners-up to move to the semifinal.

A total of eight teams- seven district teams along with Ansar and VDP, split into two groups, are taking part in the competition.