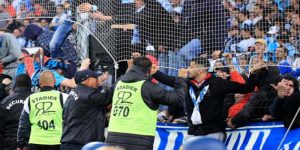 The leaders of two hardcore Marseille fan groups, a secretary who helped the organisation and a fan carrying fireworks, were handed custodial sentences of up to a year in jail.

In France a defendant would normally avoid actually going to jail if sentenced to less than two years.

The six defendants, including Rachid Zeroual, 50, leader of the South Winners group, and Christophe Bourguignon, the 49-year-old head of the CU84 group, were being prosecuted for “participation in a group formed to plan violence”.

Three were charged with damage and “violence with the use or threat of a weapon”.

The accused also include the secretary of the South Winners, who is employed by the local council, a lorry driver and a deliveryman.

All six appeared in court in jeans and sweatshirts without any visible signs of their support for the club.

On 30 January, some 300 supporters, angered by a succession of disappointing results, massed outside the club’s La Commanderie training centre to demand the departure of the club’s then-president, Jacques-Henri Eyraud, who has since been ousted.

They threw fireworks and smoke bombs and some entered the centre, reaching the changing rooms.

The club has estimated the damage was worth “at least 87,000 euros”.

This is the second case stemming from the incidents.

In the first, 11 supporters arrested at the time of the protest received six-month suspended prison sentences, a 12th, already known to the courts for theft, was given a three-month suspended sentence while two were acquitted.