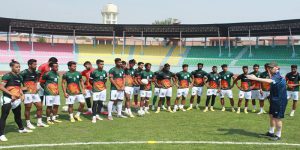 Bangladesh will take on Kyrgyzstan U-23 team in the first match of the Tri-Nation Cup scheduled to be held today (Tuesday) at Dasharath Stadium in Kathmandu.

Though Kyrgyzstan U-23 are probably the best side of the tournament but coach Jamie Day and his Co. are upbeat to make a good start in the opening match because Zico-Ashraful and Co. think that winning the first match of the tournament will pave their way to play the final match in the tournament.

Team’s head coach Jamie Day however is viewing the tournament as an opportunity to test his team ahead of the Asian Qualifiers for the FIFA World Cup Qatar 2022 and AFC Asian Cup China 2023.

The English coach earlier said it is a good platform for the players to prove themselves because Nepal is close to Bangladesh in the FIFA rankings and in terms of technique, Kyrgyzstan is a probably better side in the competition, but this tournament is a good platform to see players.

Some faces have been included in the team for the tri nation cup and they are eagerly waiting to make their debut in the tomorrow’s first match against Kyrgyzstan.

Before the first match, the booters are busy to correct their mistakes in the training session and the coach finalized the 23-member squad.

Meanwhile, the football governing body All Nepal Football Association (ANFA) has completed all preparations to host the tournament successfully and it hopes that the tournament will help bring Nepali football back to normal following a long break due to Covid-19.

Before the first match, Bangladesh team went through their official training session this afternoon at the match venue.

The coach focused on match-related practice and set pitch during the practice session.

Meanwhile, ANFA declared the Three Nations Cup champion price money with the winners’ and runners-up to bag prizes of $5,000 and $3,000 respectively while the best player will have $500. The man-of-the-match of each game will get $250.