Uzbekistan to welcome India on Road to 2022 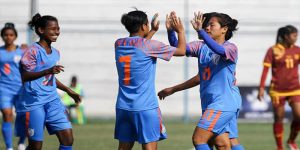 Uzbekistan will welcome 2022 AFC Women’s Asian Cup hosts India, as well as Belarus, in a series of friendly matches next month.

Fresh from an impressive run of results in Turkey in February, the Central Asian champions will play host to the two visiting teams at Almalyk’s AGMK Stadium,

Uzbekistan will meet India in April 5, with India to face Belarus three days later, before the hosts close out the international window against the European side on April 11.

With recent wins over Equatorial Guinea and Russian champion CSKA Moscow under their belt, Uzbekistan are hopeful of qualifying for the AFC Women’s Asian Cup for the first time since 2003 when qualifiers are held later this year.

As tournament hosts, India have already qualified for the Asian Finals, but head coach Maymol Rocky is eager to give her side as much time to prepare for the continental showpiece.

“After the pandemic, we have been in camp for almost four months now, and the team is really gelling well together,” Rocky told All India Football Federation (AIFF) website.

“Both Uzbekistan and Belarus are strong sides and will provide ample challenge to the girls in the two friendlies.”

While Uzbekistan and India have both been in action already this year, Belarus haven’t taken the field since suffering three successive defeats in UEFA Women’s Euro 2021 qualifying late last year.

Ranked 41st in the world by FIFA, Uzbekistan will be the top-rated side in the friendly series, ahead of India (53rd) and Uzbekistan (56th)