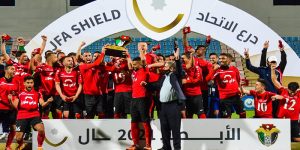 Al Jalil, who will be playing in the top flight this season, earned their first ever trophy after edging Al Wehdat in a penalty shootout after the final ended 1-1.

Al Jalil leveled the tie in the 21st minute when they were awarded a penalty following a handball by Al Wehdat defender Mohammad Al Dmeiri, with Suleiman Abu Zemaa making no mistake from the spot.

The two sides cancelled each other out for the remainder of the match, with Al Jalil goalkeeper Mustafa Abu Musameh emerging the hero in the penalty shootout with two saves.

their opponents in Group D.Al Wehdat have no time to worry about losing the final as they will continue their preparations for the 2021 AFC Champions League, with Qatar’s Al Sadd SC, Saudi Arabia’s Al Nassr and the winners of the playoff match between UAE’s Al Ain and Islamic Republic of Iran’s Foolad Khouzestan FC their opponents.