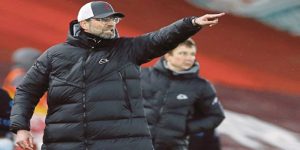 Jurgen Klopp insists the solid foundations he has laid at Liverpool will ensure his troubled club are never faced with a long absence from the Champions League.

Klopp is fighting to salvage a dismal season by lifting Liverpool into the Premier League’s top four to guarantee qualification for next season’s Champions League.

If Liverpool cannot finish in the top four, the soon-to-be dethroned English champions will have to qualify for Europe’s elite club competition by winning the Champions League this term.

They hold a 2-0 first leg lead against Leipzig in the last 16.

But regardless of Liverpool’s fate this season, Klopp is convinced the six- time Champions League winners won’t go back to the wilderness years when they spent six campaigns from 2010-11 either in the Europa League or out of Europe completely.

“This club will not be a regular out of the Champions League – this year is difficult we know that, but the potential and the power of the club is a completely different one,” Klopp said.

“I do not know the team 10 years ago but we are ready for a battle in this era, and with the team we have together.

“Seasons have momentum and we never really got it this year, that is true, but this club is in a really good position.

“In a difficult time obviously, but in a better position than other clubs I would say.

“I obviously did not think about what happened in the past but what I can say nobody has to worry about the future of the club because it is in good hands and has a really good team together, and so that is obviously the basis for a good future.”

The loss of Champions League football would mean Liverpool take a significant financial hit on top of the ongoing effects of the coronavirus pandemic.

It could also affect the composition of the squad in the summer transfer window.

But Klopp struck a hard line when asked if players for whom the Champions League was a priority might consider leaving.

“I know we have loyalty from the players. It is not a situation where a player in the squad says, ‘We are not in the Champions League so I have to leave’. That will not happen. I know them well enough to know that,” he said.

“The club is in a different situation and it will not be an issue with new players I can say that. “We said it years back if a player does not want to come to us because we don’t play Champions League next season then I don’t want him.

“And if a player wants to leave because we don’t play Champions League then I don’t want him. It is not a personal thing, but it is always like this.”