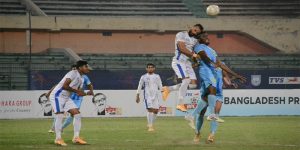 The winners’ led the first half by 1-0 goal.

In the day’s match, Abahani Limited went attack early attacks and took the lead when Brazilian forward Francisco Wagsley opened an account scoring the first goal in the 26th minute from a penalty.

After the resumption, the lead doubled for sky blue Dhanmondi outfit from a suicidal goal when Uttar Baridhara’s Uzbekistan defender Saiddoston Fozilov scored an own goal in the 55th minute of the match.

Baridhara were desperately looking to stage a fight back in the match creating some chances in the remaining proceeding but could not convert those any lacks of proper finishing.

Baridhara’s Egyptian defender Mahmoud Sayed however finally able to reduced the margin scoring a goal in the 90th minute of the match.

The sky blue Dhanmondi outfit dominated the proceeding, especially in the first half, and notched their deserving victory while Baridhara showed some attacking football in the second half but could not get the reap lacks of proper finishing.

With the day’s win, Abahani Limited returned to the second spot in the points table with 25 points from 12 matches while Uttar Baridhara Club stand at tenth spot with nine points playing the same number of outings.