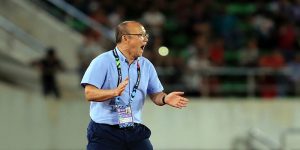 Six points from their remaining three matches should be enough for Vietnam to advance to the next stage from Group G of the Asian Qualifiers for the FIFA World Cup Qatar 2022 and AFC Asian Cup China 2023 and head coach Park Hang-seo has urged his players to stay focused.

Vietnam are leading with 11 points from five matches and need to finish top of Group G to confirm their place in the third round of the Asian Qualifiers for the FIFA World Cup Qatar 2022, which will also guarantee them a place in the AFC Asian Cup China 2023 Finals.

While Indonesia are out of the running, Malaysia, Thailand and United Arab Emirates still have a chance, setting the stage for an exciting end to Group G.

“The goal is that we get a card to the final round of the Qualifiers for the World Cup,” said Park, who has overseen Vietnam’s rise to a respected team in Asia since being appointed head coach.

“In 2021, the Vietnamese football team will play in some important tournaments and they are great challenges. Our success is in the past, but now the team must look to the future.”

“This is a busy year, so we will have to allocate strength for major tournaments such as the Asian Qualifiers, the AFC U23 Asian Cup Qualifiers, the SEA Games and AFF Cup,” said the Korea Republic native to local media.

Group G of the Asian Qualifiers is scheduled to be played in a centralised venue with Vietnam to face Indonesia on June 7, Malaysia (June 11) and UAE (June 15).