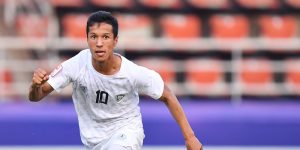 Abdikholikov makes the switch from to Rukh Uzbekistan Super League outfit FC Nasaf, putting pen to paper on a three-year contract. He will wear the number 16 shirt.

The 23-year-old arrives in Ukraine after a 112-game, 45-goal stint in the Uzbek top flight, including 17 goals in 25 league matches last season; a tally which made him the second highest scorer in the league behind Pakhtakor’s Dragan Ćeran.

In addition to his three senior national team appearances, Abdikholikov was a member of the Uzbekistan squad that won the AFC U23 Championship in 2018 and played a larger role in their semi-final finish in 2020, starting every match and scoring against eventual winners Korea Republic.

Speaking to Rukh’s official website, Abdikholikov said the move was part of a long-term career plan.

“I am very happy to become a Rukh player,” he said.

“I’ll try to help the club with quality performances and by scoring goals. I look forward to the first training session. I have positive emotions. I had offers from other clubs on better terms, but money is not important to me. I want to grow as a footballer and prove myself in Europe in a good championship.

“For me, Rukh is something of a springboard. Clubs like Shakhtar (Donetsk) and Dynamo (Kyiv) play in the Ukrainian league, which demonstrates the high level of the championship.”

Abdikholikov also revealed his choice of number 16 was inspired by Maxim Shatskikh, the retired Uzbekistan striker and all-time top scorer in Ukrainian football, who finished his career in an amateur capacity with Rukh.

“Maxim is a legend of both Uzbek and Ukrainian football. I was impressed by the way he played, and I know that he used to play for Rukh.”

Urunov featured in nine competitive matches for Spartak, whose challenge for the Russian title will continue without the four-cap Uzbekistan international.