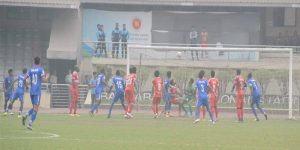 In the day’s match, Cameroonian forward Christian Bekamenga scored the all-important goal for the freedom fighters in the 41st minute of the match and Muktijoddha maintained the lead till the final whistle.

After the resumption, Police Football Club however tried heart and soul to stage a fight back in the match but could not convert any lack of proper finishing.

Muktijoddha played good football, especially in the first half, and notched their deserving victory while Bangladesh Police Football Club were off-colored on the day.

The day’s win saw, Muktijoddha improved their tally with seven points from eight matches while Police remained at their previous credit of eight points from the same number of outings.

Muktijoddha will play their next match against Brothers Union Club while Bangladesh Police Football Club meet Lieutenant Sheikh Jamal Dhanmondi Club. Both the matches will be held on Monday (Feb. 22) at the same venue.