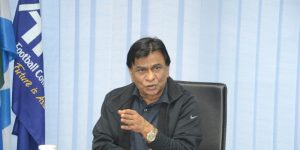 Today, on 15 February, at the BFF Head office in Motijheel, the Honorable President of BFF, Kazi Md. Salahuddin took part in a question-and-answer session with the journalists at a press conference.

The press conference was attended by journalists from various print, electronics, and online channels of the country. Hon’ble President Kazi Md. Salahuddin expressed his views on all the recent complaints of Sheikh Jamal Club regarding referees and bringing VAR (Video Assistant Referee) technology.

Regarding the claim of Sheikh Jamal Club, he said, “I have seen their controversial video. It’s actually very vague. As I have seen myself with the officials of the technical department.

They themselves have been divided over it. One part says it is wrong, another part says it is not wrong. So, we sent the video to FIFA. We will accept whatever opinion they give. ‘

Asked if there would be an internal investigation into the matter, he said, “I have no objection. I will inform the office about it.’