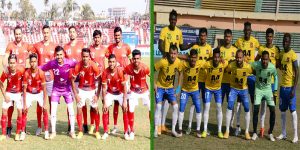 Bashundhara Kings, so far, maintained their all-win run in the league with 21 points from seven matches.

The star-studded side earlier made a winning start in the league beating Uttar Baridhara Club by 2-0 goals, defeated Bangladesh Police Football Club by 2-1 goals in the second match, edged past Brothers Union Club by 1-0 goal in the third match, blanked old Dhaka outfit Rahmatganj Muslim and Friends Society by 3-0 goals in the fourth match and dumped Mohammedan Sporting Club Limited 4-1 goals in the fifth match, edged past Chittagong Abahani Limited 1-0 in their sixth match and blanked Bangladesh Muktijoddha Sangsad Krira Chakra by 3-0 goals in the seventh match.

Sheikh Jamal Dhanmondi Club who stand at second position in the league table, have 16 points from six matches by maintaining their domination in the league, but they lost point in their previous match against Abahani Limited Dhaka.

In the day’s other match of tomorrow’s fixture, Saif Sporting Club meet Sheikh Russel Krira Chakra to be held at the same venue at 6 pm.

Sheikh Russel KC stand at third position in the points table with 16 points from seven matches while Saif Sporting Club placed at fifth position with 10 points from six matches.

The match kicks off at 3 pm.