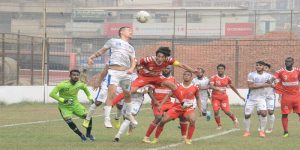 In the day’s match, forward Sumon Reza put Baridhara ahead in the 42nd minute while Yusuke Kato neutralized the margin after the lemon break scoring for Muktijoddha in the 47th minute of the match.

After that, both the teams got several scoring chances in the remaining proceeding but failed to convert any of those into a goal.

Earlier, Uttar Baridhara Club lost to Bashundhara Kings by 0-2 goals margin in their league opening match, suffered 0-1 defeat to Bangladesh Police Football Club in the second match, played to a 3-3 goal draw with Brothers Union Club in their third match, lost 1-3 to Rahmatganj Muslim and Friends Society in their fourth match, forced Mohammedan to play 1-1 draw in their fifth match and played out to a 2-2 goals draw with Chittagong Abahani Limited in their sixth match.

While the Muktijoddha Sangsad KC lost their opening league match to Lieutenant Sheikh Jamal Dhanmondi Club by 1-2 goals, beat Arambagh Krira Sangha by 1-0 goal in their second match, lost to Saif Sporting Club by 1-2 goals margin their third match, suffered 0-1 goal defeat to Sheikh Russel Krira Chakra in the fourth match, went down 1-4 defeat to Abahani Limited, Dhaka in the fifth match and lost to holders Bashundhara Kings by 0-3 goals in their sixth match.