Perseverance pays off for El Shenawy 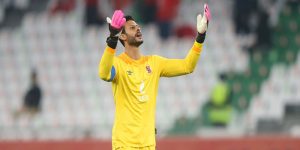 Mohamed El failed to establish himself during first spell at Al Ahly SC
Upon returning in 2016, he became first choice for club and country
After fulfilling a dream against FC Bayern München, a podium finish now looms

Mental strength plays a key role in every sport, and football is no exception. Many players have great potential yet never manage to fulfil it. To do that and enjoy an enduring career, resilience and the ability to deal with pressure are essential.

A case in point is Al Ahly SC and Egypt goalkeeper Mohamed El Shenawy, who only played one official game during his first spell at the club in 2008. It was against ENPPI Club, and the Red Devils, having already wrapped up the Egyptian league, fielded a team of youngsters and regular substitutes. The ensuing three-goal defeat did nothing to enhance the reputation of the young keeper, who did not start another game and was soon deemed surplus to requirements.

After parting company with the Cairo giants, El Shenawy’s search for new opportunities took him to El Gouna, a picturesque Red Sea resort near the city of Hurghada, some 450 kilometres from the capital. However, when he got there, he learned that the local team had already signed another promising keeper – Sherif Ekramy – and that the journey had been in vain.

Undeterred, El Shenawy returned to Cairo and joined Tala’ea El Geish. That was followed by loan spells with El Entag El Harby and Haras El Hodoud, and a permanent move to Petrojet in 2013. Three years later, an unmissable opportunity came knocking: the chance to return to Al Ahly. So good had his performances been, that officials at the club were determined to secure the services of the same player they had let go eight years previously.

Seek and you will find
El Shenawy’s return to the Red Devils changed the course of his career. As fate would have it, Sherif Ekramy – who El Gouna had signed instead of him in 2008 – was then their first-choice keeper. This time, however, the new man made the No1 shirt his own and soon hit the heights with Al Ahly.

Shenawy also became a regular starter with the national team, going on to play two of the Pharaohs’ three games at the 2018 FIFA World Cup Russia™. Then in 2020 he tasted continental glory in the CAF Champions League, earning his side their place at the FIFA Club World Cup Qatar 2020™. Victory in their opening game against Al Duhail SC allowed him to fulfil his dream of playing against FC Bayern München and meeting Manuel Neuer, who he considers the best goalkeeper in the world.

Focused on Palmeiras
After Monday’s 2-0 defeat to Bayern, the Egyptian shot-stopper sought out and embraced Neuer before heading off to face the media.

“Don’t forget we were up against the champions of Europe,” he said. “We played a good game and gave a performance that dignifies Al Ahly and the African continent. We’ve learned a lot of things in these games,” he added.

The Al Ahly No1 then asked everyone to put the Bayern game behind them and focus on the third-place fixture.

“After a great game against the European champions, we’re very confident we can compete for third place. We’ll head into that game with real desire and solely focused on Palmeiras. It’s going to be harder,” he insisted.

“I’m sure our opponents have analysed our matches and already know our strengths and weaknesses, so we have to be very careful in this fixture,” he warned.

El Shenawy also spoke about his dream of returning to Qatar in less than two years’ time to take part in the next FIFA World Cup™, which will be held for the first time in the Middle East. “Things are going well. The Qatari stadiums are great. I’m optimistic about being here with the Egyptian national team for Qatar 2022.”