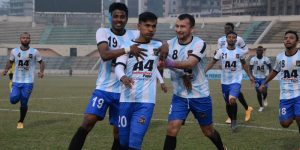 Saif SC scorer Faisal Ahmed opened the net in the 22 minute and Nigeria striker John Okoli doubled the lead in the injury time of the first half.

But everything changed in second half when the Jamal boys recommence the match in new spirit. Though they had to wait 30 minutes more to reduce the margin, it helped them be in control of the atmosphere of the match. Gambian striker Solomon King scored the goal.

Striker Nurul Absar netted the equalising goal in the next minute.

The Dhanmondi club finally scored the match winning goal in the injury time of the second half. It was Solomon again who scored his second from a penalty kick.

Winning the match Sk Jamal moved to the third place with 12 points when Saif SC stayed at the same fifth place with seven points.