Rahmatganj wins 3-1 coming from one goal behind 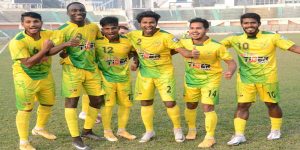 Baridhara boys found the net in the 38th minute. After a opponent defendersl mistakenly provided the ball to Rahmatganj’s striker Sujon Biswas while trying to clear it, the Rahmatganj striker took a calculated shot towards the post and rocked the castle.

But the Old Dhaka club succeeded in levelling the margin in the injury time of the first half. Receiving the ball from midfielder Shahedul Alam, Cote d’Ivoire striker Lorougnon Crist Remi passed that to Tajikistan striker Dilshod Vasiev near the small box who put that home.

In the first minute of the second half, Rahmatganj was given a corner. Defender Mahmudul Hasan Kiron took the corner and Egyptian defender Alaaeldin Nasr Flsayed Eissa Elmaghraby headed on the ball to provide that to Cote d’Ivoire striker Lorougnon who too headed on that to hit the net.

In the 58th minute, the Old Dhaka club extended the margin when midfielder Enamul Islam received the ball from Tajikistan striker Dilshod Vasiev and carried that ball near the small box before sending that home.

The Baridhara boys could not reduce the goal till the long whistle.