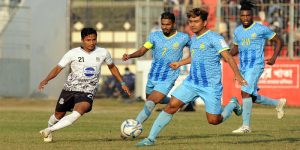 The spactator-packed stadium which in fact is home venue of Mohammedan for the season was the main spirit of the traditional black and white jersey on the say.

On the day, the sky blue outfits found the net in the 13th minute. Their Afghanistan defender Mashi Saighani took a 50-yard long cross and Hatian striker Belfort Kervens Fils headed pass the ball to Brazilian striker Francisco Wagsley Rodrigues De Sousa Filho who sent it home with another header.

After four minutes, Mohammedan equalised the margin. Midfielder Jafar Iqubal and Nigerian midfielder Abiola Nurat kept the markers busy while passing the ball to each other and, finding a hole, passed it to Amir Hakim Bappy who too passed that to Mali striker Souleymane Diabate who amazingly rocked the post.

Abahani went ahead once again in the 33rd minute. Receiving the ball from the left side, Belfort Kervens took a shot towards goal while the ball was bounced on an opponent and midfielder Jewel Rana took control over the ball before hitting the farpost.

In the 66th minute, Mohammedan was awarded a corner. Midfielder Habibur Rahman Shohag took the corner shot and Nigerian midfielder Abiola Nurat found it in the goal mouth before passing the ball to Mali striker Souleymane Diabate who wasted no time to score the equiliser.

None was able to score anymore till the long whistle and the match finished with the deadlock.