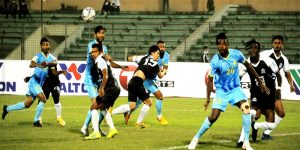 The famous rivalry of Dhaka football clubs Mohammedan Sporting Club and Dhaka Abahani is rolling on Thursday in Cumilla.

The match is scheduled to be played at 3:00 pm at Shaheed Dhirendranath Datta Stadium.

The two archrival faced each other in the season opener Federation Cup football recently in December where the sky blue outfits beat the opponent by 3-0 margin. But the match was played in Dhaka. In fact all the Dhaka Derbies for the last couple of years were played in Dhaka. The last Dhaka Derby played outside of Dhaka was on the sixth of December in 2016 when Abahani won the match by 2-1. That match was played in Gopalganj.

Currently, Abahani has nine points from from three points when playing same as the opponent Mohammedan has four points.

Yet the two are not even in strength anymore, a match between the two always means something to the fans of local football. A match of Mohammedan and Abahani was and still is the biggest match and attracted and still attract the fans till the day.

Apart from the Dhaka Derby, there are two more matches of the ongoing league on the day. Chittagong Abahani will face Sheikh Russel Krira Chakra at 3:30 pm and Muktijoddha Sangsad Krira Chakra will meet Saif Sporting Club in the other match at 6:00 pm. Both the matches will be played at BNS, Dhaka.