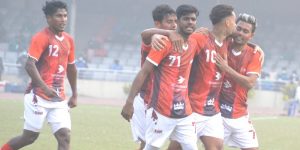 Despite levelling the margin once Coach Pakir Ali’s Police FC boys could not hold rivals Bashundhara Kings in a tie as the opponents won the match by 2-1 margin on Tuesday. The two opponents engaged in the second round match of Bangladesh Premier League (BPL) on the day at Bangabandhu National Stadium, Dhaka.

Brazilian striker Robson Azevedo da Silva scored the two goals for the winners. In the match, Bashundhara took the lead in the 16th minute following the first goal of Robson. Côte d’Ivoire defender Lancine Touré, in the 42nd minute, levelled the margin for the Police boys with a header. But Robson broke the deadlock in the first minute after the breather scoring his second goal for the Bashundhara boys.

Now, Sheikh Russel Krira Chakra and Old Dhaka club Rahmatganj Muslim Friends Society will engage in the Wednesday match at 4:00 pm at the same venue. Sk Russel already has three points from its first round match while opponent Rahmatganj team has a single point from a draw in the first round.

Old Dhaka team was eliminated from the group stage of season opening Federation Cup, Sheik Russel was able to play the quarterfinals.