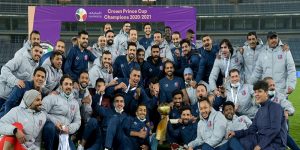 Kuwait SC are now tied with Al Qadsia, with both having won the Kuwait Crown Prince Cup nine times.

Kuwait SC leveled the score in the second half when Talal Al Fadhel sent a free-kick into the danger area before Tunisian forward Ahmed Akaichi’s lob found the back of the net on 65 minutes.

The two sides failed to score in the remaining minutes of the half but Kuwait sealed the win in the second period of extra time when French midfielder Abdoul Sissoko fired home from inside the box.