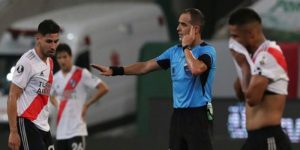 Palmeiras held on to reach the Copa Libertadores final despite losing 2-0 to 10-man River Plate on Tuesday as the
Argentines were twice denied by controversial VAR decisions.

River dominated the semi-final second leg at a empty Allianz Parque stadium in Sao Paulo, but goals from Robert Rojas, who was later dismissed, and Rafael Borre were not enough to overturn their 3-0 home defeat last week
to the Brazilians, who progressed 3-2 on aggregate.

Palmeiras, though, had the video assistant referee to thank for chalking off a second half goal from Gonzalo Montiel and then denying River a penalty.

River threw caution to the wind from the off but left space at the back for Palmeiras to exploit.

Rony was played clean through on nine minutes by Gabriel Menino, but as he tried to take the ball around Franco Armani the Argentine goalkeeper did brilliantly to get a hand to it and save his team.

Home goalkeeper Weverton was by far the busier of the two, though, and repeatedly kept River at bay.

He did brilliantly to get his fingertips to a speculative long range effort from Chilean Paulo Diaz that was heading for the top corner.

But from the resulting corner, River took the lead as Paraguayan center- back Rojas leapt like a salmon and powered a header into the top corner from the penalty spot, leaving Weverton rooted to his line.

A minute before the break, though, River doubled their lead.

Uruguayan Nicolas De La Cruz, whose corner led to the opener, crossed from the right and Colombian Borre somehow arrived unmarked inside the six yard box to head home.

De La Cruz was at the heart of River’s attacking play and sent a secondhalf free-kick just wide before Weverton got down well to claim his daisy- cutter.

Palmeiras were struggling to deal with crosses into the box and on 52 minutes they were seemingly undone again.

Fabrizio Angileri sent the ball over from the left and Montiel was free on the edge of the six yard box to volley back across Weverton and in.

However, after a long VAR check, it was controversially deemed that Borre was marginally offside earlier in the move and Palmeiras survived.

River’s tails were up, though, and Weverton made a reaction save to prevent Luan diverting a cross from Montiel past his own goalkeeper, with De La Cruz hitting the side netting from the follow up.

River’s hopes suffered a blow 17 minutes from time, though, when Rojas was harshly shown a second yellow card and given his marching orders.

Just moments later, however, Alan Empereur was adjudged to have tripped Matias Suarez in the area and Uruguayan referee Esteban Ostojich pointed to the spot. Yet again VAR came to Palmeiras’ rescue.

River continued to dominate and from one corner Weverton saved an Enzo Perez header before Borre lashed the rebound against the post and Matias Vina headed a Perez follow up off the line.

The game finally ended after 13 minutes of overtime but not before one more lengthy VAR check denied River a dramatic late penalty after Borre went down under a Kuscevic challenge.