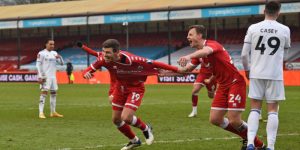 Leeds suffered a humiliating FA Cup exit against Crawley as the League Two side swept to a stunning 3-0 win, while eighth-tier Marine’s hopes of causing the competition’s greatest shock were crushed in a 5-0 defeat against Tottenham.

After the spiking coronavirus pandemic wreaked havoc with matches across the third round on Friday and Saturday, the FA Cup was back on more familiar ground on Sunday as Leeds became the competition’s latest big name to be knocked out by a feisty underdog.

While Marine’s romantic adventure was cut short by Carlos Vinicius’s hat-trick and Chelsea and Manchester City progressed to the fourth round with ease, Crawley’s unexpected success encapsulated the FA Cup’s unique charm at a time when football is badly in need of some positive news.

Numerous clubs have been hit by Covid-19 problems as the new variant sweeps across Britain, forcing Aston Villa and Derby to field teams of youth players for third round defeats against Liverpool and non-league Chorley respectively.

Despite calls for the English season to be halted, the FA Cup goes on for now and Crawley relished their chance to steal the spotlight.

Leeds sit 12th in the Premier League after a fine first season back in the top-flight, but boss Marcelo Bielsa paid the price for making seven changes at The People’s Pension Stadium.

On a fairytale day for Crawley, it was fitting that Nick Tsaroulla should open the scoring with his first career goal in the 51st minute.

“These players have got a lot to prove to the clubs who have released them and we’ve showed what we can do against a really good side,” Crawley boss John Yems said.

How much Bielsa knew about Wright is in doubt, but he insisted he wasn’t surprised by Crawley’s display.

“It’s not a question of surprise. We knew the characteristics of their players. We had the ball for a long period of time but we couldn’t do much with it,” Bielsa said.

Marine, of the Northern Premier League Division One North West, were trying to bridge the biggest gap — 161 places — between opponents in FA Cup history.

Marine’s squad is comprised of teachers, NHS staff, bin men and factory workers, with their tiny stadium in the Merseyside town of Crosby providing a surreal setting for the visit of Jose Mourinho’s stars.

Appropriately for a match against a team named after a local pub, virus restrictions meant Tottenham had to change in a stadium function room with a bar.

Marine’s ground is lined on one side by houses, so a few lucky locals were able to watch for free as Neil Kengni almost gave Marine the lead when his 30-yard drive cannoned off the bar.

Tottenham, without Harry Kane and Son Heung-min, took control thanks to two close range finishes by Vinicius in six minutes.

Alfie Devine enjoyed a debut to remember when the substitute fired home in the 60th minute, making him Tottenham’s youngest ever scorer at 16 years and 163 days.

“The boys were professionals and didn’t stop until the game was over. The attitude means a lot for me and also for the competition and to Marine’s guys, because they felt we played seriously,” Mourinho said.

Mason Mount marked his 22nd birthday with a 25-yard strike and, after 12 games without a goal, Timo Werner finally got on the scoresheet in the 44th minute.

Callum Hudson-Odoi and Kai Havertz netted in the second half.

Manchester City cruised to a 3-0 win against second tier Birmingham at the Etihad Stadium, with two goals from Bernardo Silva and one from Phil Foden.

Brighton needed penalties to see off League Two Newport County after both sides scored in injury time in a 1-1 draw.

Solly March’s opener for the Premier League side was cancelled out by Adam Webster’s own goal, but after no further goals in extra-time, Webster made amends with the winning spot-kick.