King Kazu signs up for another year at Yokohama 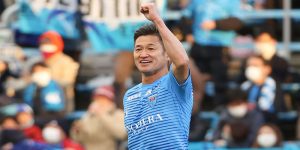 Veteran striker Kazuyoshi Miura will continue his playing career for another season after the world’s oldest goal scorer in a professional league signed a new one-year contract with Yokohama FC, the J.League club announced on Monday.

The former Japan forward, known as ‘King Kazu’, will turn 54 the day before the J.League’s 2021 season begins on February 27 and the up-coming campaign will be his 16th with Yokohama FC and his 36th in total.

Miura started his professional career in Brazil with Santos, but it was with Verdy Kawasaki in the early days of the J.League that he made his name, leading the club to back-to-back titles in the league’s first two seasons.

He then went on loan at Genoa in Serie A before returning to Japan, where he won the Emperor’s Cup in 1996.

Miura also won the AFC Asian Cup with Japan in 1992 and went on to score 55 times in 89 internationals for the Samurai Blue, although he missed out on selection for the country’s debut appearance at the FIFA World Cup Finals in France in 1998.

He joined Yokohama FC in 2005 after a spell in Croatia with Dynamo Zagreb before joining Sydney FC on a short-term loan to play at the 2005 FIFA Club World Cup.

His last goal came in March 2017 when he netted the only goal in a 1-0 win over Thespakusatsu Gunma in Japan’s second division, with that strike making him the oldest-ever scorer in a professional league at 50 years and 14 days old.

Last season he played four times as Yokohama FC returned to the top flight of Japanese football, while he also featured twice in the J.League Cup.

The 38-year-old has signed a one-year deal with the club where he started his professional career in 2001 after a single-season spell with Tokyo Verdy 1969.

Okubo, who won the AFC Young Player of the Year award in 2003, finished as the leading scorer in the J.League on three occasions, topping the charts in 2013, 2014 and 2015 during his time with Kawasaki Frontale. He also represented Japan at the FIFA World Cup in 2010 and 2014.