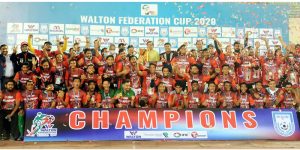 The defending champion Bashundhara Kings had kept the trophy of Federation Cup winning over newbie finalist Saif Sporting Club by 1-0 goal in the final on Sunday.

The unbeaten champion previously played the final twice and became runner-up in the seasons 2019 and champion in 2020. On the contrary, the Sunday match was Saif SC’s first final of any local football event.

Earlier, Bashundhara secured the final beating Dhaka Abahani by 3-1 margin while Saif came to the final with a 3-0 win over Chittagong Abahani.

In the final, Bashundhara found the net in the fourth minute but that was not a goal due to an off side. Getting the ball from midfielder M Ibrahim, skipper and defender Topu Barman sent it home.

A 45-yard long shot of Saif defender Rahmat Miah could bring the much expected lead in the 47th minute but the flight was blocked by Bashundhara custodian Anisur Rahman timely.

The Bashundhara boys found the match winning goal in the 52nd minute. Brazilian striker Robson Azevedo Da Silva provided the ball to Argentine booter Raul from behind and the Argentine striker took a grounded shot and hit the net.

Saif’s Nigerian striker Ikechukwu Kenneth Ngwoke had almost levelled the margin in the 69th minute as he received the ball near the edge of the box from a fellow and took a shot to post yet his hope was diminished when he saw that the shot was saved for a corner by Bashundhara custodian Anisur Rahman Ziko.

Saif SC failed to hold the opponent till the end.