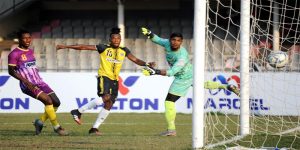 Saif Sporting Club stormed into the final of Federation Cup football for the first time in history as the team registered a 3-0 win against Chittagong Abahani on Wednesday.

It is the highest achievement of Saif in any local event till the day.

In the match, Saif opened the book in the 8th minute. The team was awarded a freekick the freekick was blocked by the wall and finding the ball in the left side of the box, Nigerian defender Emmanuel Ariwachukwu placed the ball into the post.

Saif boys doubled the lead in the 72nd minute as their striker Arifur Rahman broken through the opponent defence-line and passed the ball to Nigerian striker Ikechukwu Kenneth Ngwoke and the foreigner killed no time before hitting the net.

In the 76th minute, Chittagong Abahani became a 10-man unit as its Ivory Coast midfielder Kephi Jean Charles Didier was handed the second yellow card, equivalent to a red card, for grounding Saif midfielder Al-Amin on the right flank. The severely injured Al-Amin was rushed to a hospital immediately.

Chittagong boys could reduce the margin in the 78th minute when midfielder Rakib Hasan received a cross of defender Nasirul Islam before entering the box and took a post-bound shot which unfortunately bounded on the crosspiece.

Saif SC sealed the 3-0 win in the 88th minute when midfielder Sirujiuddin Rakhmatullaev chipped the ball over the opponent defenders to provide defender Yeasin Arafat who quickly entered the box from the right side and sent the the ball home.

None of the rivals was able to score any in the remaining time. Yet winning the match, Saif didn’t celebrated as its one of the key players Al-Amin was injured severely which incident certainly had an impact on the entire team. The midfielder was the player of the match in the team’s previous match.