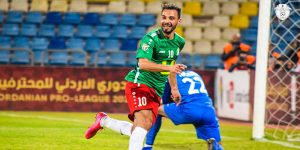 Runaway winners Al Wehdat needed only a draw to seal the title but Rateb’s 65th minute volley from outside the box made sure the club fondly known as The Green Giant triumphed on 50 points with a game to spare.

Al Wehdat last appeared in the Continental competition in 2019 when they ended their campaign in Qualifying Round 1, losing 3-2 to Al Kuwait.

Second spot in the Jordanian Pro League is still up for grabs as Al Jazeera and Al Ramtha, tied on 38 points, will face each other in their final match of the season on Sunday, while Al Wehdat will play Al Sareeh.

Last year’s champions Al Faisaly are a distant sixth in the standings and can secure a top four finish if they win both their matches against Al Salt, later on Wednesday, and FC Ma’an next Tuesday.