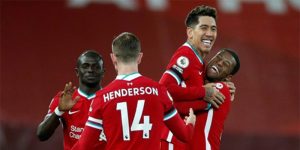 Premier League football and other forms of elite professional sport in England will be allowed to continue despite new national lockdown restrictions announced by the British government on Monday.

The measures, which include the closure of primary and secondary schools, will come into effect Wednesday, he said after Scotland announced similar measures to come into force from midnight (0000 GMT) on Tuesday.

But a list of exemptions published by the UK government allowed “elite sportspeople (and their coaches if necessary, or parents/guardians if they are under 18) — or those on an official elite sports pathway — to compete and train”.

One key point in determining whether a sporting competition can go ahead will be if it has, as the Premier League does, a testing regime and the provision of bio-secure bubbles in place.

Matches, however, will continue to be played behind closed doors.

Prior to Johnson’s announcement, England Netball announced their home series with Jamaica, scheduled for late January, had been postponed because of international travel restrictions between Britain and the Caribbean island imposed as a result of the pandemic.

A lockdown similar to the one introduced in England in March last year as a result of a rising number of Covid-19 cases means outdoor gyms, golf courses and tennis courts will close, with amateur outdoor team sports prohibited.

Johnson’s announcement followed a statement earlier on Monday by Nicola Sturgeon, the First Minister of Scotland, that will see professional sport continuing in Scotland despite rising numbers of Covid-19 cases.

Scottish football and rugby clubs are on a Scottish government exemption list that states “those involved in professional sports, for training, coaching or competing in an event” are among the groups those allowed to leave their homes.

Scotland’s new lockdown will last for at least the rest of January.

Sturgeon, the leader of the pro-independence Scottish National Party (SNP), said a new faster spreading variant of coronavirus, first identified in the UK in December had been a “massive blow” in the battle against the virus. – Celtic row –

The Hoops flew to the Middle East on Saturday following a derby defeat by Rangers that left them a huge 19 points adrift of their arch Glasgow rivals in the race for the Scottish Premiership title.

The Scottish government responded by calling for a Scottish Football Association investigation into whether Celtic had breached coronavirus exemptions.

But, in a series of tweets issued Monday, Celtic defended their position by saying: “If the club had not received Scottish Government approval then we would not have travelled.”