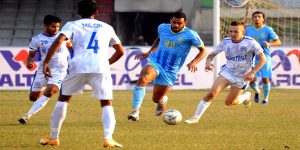 The 11-time champion of Federation Cup Dhaka Abahani had confirmed the semifinals of the event after overcoming Uttar Baridhara Club by 1-0 in the last quarterfinal match on Monday.

The winners are to face Bashundhara Kings in the second semifinal schedule for 7 January.

In the match on Monday, Uttar Baridhara boys were not a minnow against Abahani. They fought equally and were seen challenging the opponent with good attacks. They had nothing to lose in the match that’s why put all their strength onto it and made the opponents literally sweat over.

In the 17th minute, Dhaka Abahani’s Haitian striker Belfort Kervens Fils was grounded before the D-box by a Uttar Baridhara defender and the Sky blue outfits were awarded a freekick by referee Alomgir Sarker. But Brazilian striker Francisco Wagsley Rodrigues De Sousa Filho who took the freekick sent the ball right into custodian’s grip.

In the 35th minute, the Baridhara boys almost took the lead. Their custodian Mamun Alik stopped a quick attempt of Abahani striker Francisco and provided the ball to fellow striker and skipper Suman Reza with a 50-yard long cross and this skipper too curved a long cross towards the post which unfortunately bounced on the crosspiece before flying out the ground.
After the breather, Baridhara thickened its defence wall while Abahani kept trying to breach into the opponent’s line. The sky blue outfits were able to make several chances to score yet failed to convert almost all the chances due to lack of better finishing.

Abahani midfielder Jewel Rana was grounded in the right flank by Baridhara striker Sujon Biswas in the 63rd minute and the team was gifted a freekick. Their Brazilian midfielder Raphael Augusto Santos Da Silva took the shot and, after a few passes, midfielder Jewel got the ball in the packed box and had a good chance to score yet his shot failed to find the net.

However, a member of BFF and Abahani team manager Satyajit Das Rupu was present at the dugout of the club in the match. The decision regarding federation officials representing a club can or cannot enter the ground during the matches is still pending. This Abahani official’s presence in the tent raised question on the day as well. Baridhara officials, in the post match briefing, said that the opponent hadn’t respected fair play in the match.