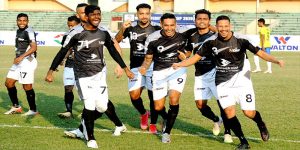 Bashundhara Kings had moved to the semifinals of Federation Cup after the defending champion blanked Sheikh Jamal Dhanmondi Club by 2-0 margin in third quarterfinals on Saturday.

After Sunday’s win, the Bashundhara team is set to play the second semifinal schedule for 7 January.

On the day, Bashundhara Kings played well and dominated the entire match.

They opened the net in the 10th minute following a combined effort of its Brazilian and Argentine recruits. Brazil midfielder Jonathan Da Silveira Farnandes Reis came near the box from the right flank and overcome his marker opponent defender Monsur to pass the ball to striker Raul Oscar Becerra right before the small box who placed that home nicely.

In the 67th minute, Bashundhara had missed a chance to double the lead when striker Robson received the ball from the midfield and curved that towards the post and the ball actually flew over the bar.

Midfielder Ibrahim of the team had the opportunity to score the team’s second goal in the 87th minute. Brazil midfielder Jonathan Da Silveira Farnandes took the corner shot and Ibrahim tried to convert it while it was bounced on an opponent defender before hitting the left side bar.

The Bashundhara boys at last found their much awaited second goal two minutes before the long whistle. Midfielder Jonathan was grounded near the edge of the D-box by an opponent defender and referee Bitu Raj Barua awarded Bashundhara a freekick. Brazilian striker Robson had no problem hitting the net this time.

Now, Group-B runner-up Uttar Baridhara Club and Group-D champion Dhaka Abahani will engage in the last quarterfinals of the event on Monday at the same venue. The winner of this match will meet Sunday’s winner in the second semifinal.