Maradona was also a poet: Pope 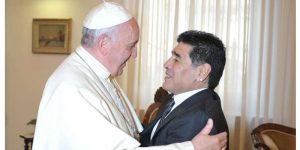 Pope Francis has recalled meeting Diego Maradona, who he described as a “poet”, though he conceded the Argentina great was a “fragile man”.

Diego Maradona has been hailed as a “poet and a great champion” by Pope Francis, the head of the Catholic Church.

Maradona passed away at the age of 60 in November having suffered heart failure.

The former Argentina star is considered one of the world’s greatest ever players, having led his country to World Cup glory in 1986 and taken Napoli from Serie A also-rans to one of Italy’s dominant forces.

Maradona had his off-field issues, including drug abuse and doping scandals, but Pope Francis, who met Maradona in 2014, praised the impact his compatriot had.

“I met Diego Armando Maradona during a Match for Peace in 2014: I remember with pleasure everything that Diego did for Scholas Occurrentes, the foundation that takes care of the needy all over the world,” The Pope told Gazzetta dello Sport.

“On the pitch he was a poet and a great champion who gave joy to millions of people, in Argentina as in Naples. He was also a very fragile man.”